Decimal to ASCII, Base64 And Binary Converter Free

To use prepost Decimal to ASCII Converter, Enter the Decimal Numbers below


About Decimal to ASCII

Convert Decimal Input to ASCII output using our free Decimal to ASCII Converter. Enter the decimal numbers in the given field to get its ASCII output in an instant.

Data can be represented in a variety of different formats. Computer systems use binary numbers to represent textual as well as visuals data. But there is also another representation that helps better understand how the conversion works. This is the ASCII representation. 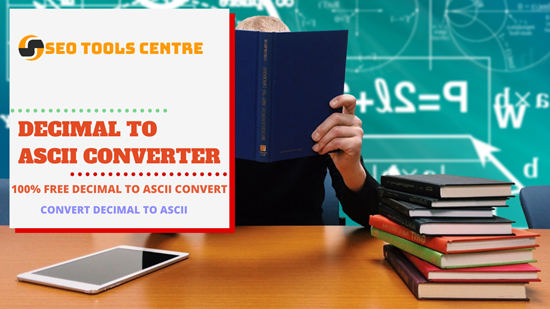 How to Use this tool for ASCII to Decimal Conversion?

This tool is not just for Decimal to ASCII conversion. You can also go in the opposite direction if you want to. You can choose the ASCII to Decimal Converter option to convert ASCII values to hex, base64, binary or decimal with this tool. There are a lot of different conversion settings for different data representations that you can try out using this tool.

How to use SEO Tools Centre Decimal to ASCII Converter? 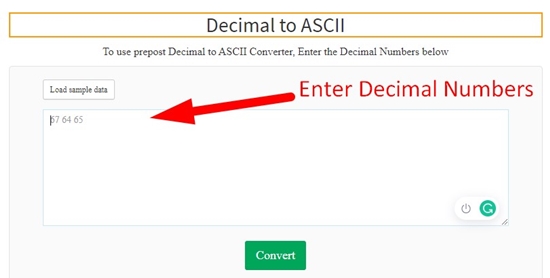 Decimal to ASCII converter by SEO Tools Centre is a free-to-use as the binary to text converter tool that offers a wide range of conversion settings. You can choose from different conversions based on your requirement. This tool doesn’t charge you anything for performing the ASCII to Binary Conversion. You won’t need to use paid tools to perform the conversion anymore.

Comes with a Simple UI Design

The UI design of our Decimal to ASCII converter is simple and user-friendly. The rich UI of this tool makes it easier for everyone to use this tool 24/7. This tool is a must for students who must deal with large decimal values and convert them to ASCII manually. This tool can help them a lot with the conversion of Decimal Numbers and values.

When you are on a deadline and you don’t have enough time to convert Decimal to ASCII manually, this tool will go a long way for you. You can use all the features that this tool has to offer to generate ASCII output for your input values in a fast and simple way. And not just that, you can also do ASCII to Decimal conversion if you ever want to go in that direction.

Get Rid of Manual Conversion

Manual conversion is difficult and can take a lot of time. Although it is important for computer science students to learn how things work behind the scenes, you don’t always have the time to process large values like that. In that case, you can use the automatic conversion tool for converting Decimal to ASCII. You can do that using our free converter tool. It also supports conversion for different data formats which makes it stand out from other tools.

No Need to Learn Manual Conversion

Learning manual conversion is important but not necessary. If you are not an IT major, then you don’t necessarily need to learn the backend of data representations. If you have an assignment that asks you to perform Decimal to ASCII conversion, you can simply just make use of our tool to perform the conversion. It would help you save time that you can use for your other studies-related tasks.

What is decimal to ASCII?

How to use decimal to ASCII?

The use of the decimal to ASCII converter is quite simple. You need to input the decimal values that you want to convert, and the tool would take care of the rest of the conversion.

How to convert ASCII to binary manually?